I want to preserve …

We’ve highlighted some important call-to-action projects that are in need of your help to preserve their history. Use the Donate button to contribute to a project today. Through the Donate button, you can use the dropdown menu to select a particular project and can even choose to make it a monthly recurring donation!

Proposed land exchange involving lower Rollins Pass: A fragile yet remarkably intact cultural landscape in Colorado’s mountains may lose the protection of being part of US Forest Service lands as part of a proposed land exchange that may take place in the coming year. This land swap with a private developer would open 543 acres along the still unpaved historic mountain pass with 11,000 years of history to inappropriate new development. This would endanger early Native American hunting features, unchanged vistas seen by early settlers traversing the Rocky Mountains, and evidence of the railroad that once carried travelers over Rollins Pass.

The developer seeks to trade between 1,536 and 2,261 acres of land for 543 acres held by the US Forest Service. Such a numerical advantage of a more than fourfold increase of land may appear incredibly attractive to the US Forest Service to continue with the exchange. Rollins Pass holds resources in a National Historic District spanning Grand, Boulder, and Gilpin counties and this land exchange would damage the historic district as well. Unfortunately, this project has initial support from local leadership and economic influencers—including multimillion dollar resorts—yet none of their letters of support mention Rollins Pass nor its cultural and non-renewable historic resources. Instead, community leaders have mirrored the developer in writing to the US Forest Service that the 543 acres “are squarely in the development path and are a logical place for future growth to occur.

Take action today! Email shoshana.cooper@usda.gov and tell the US Forest Service to keep our public lands in public hands—say NO to the Diamond Bar T Land Exchange.

The Balcony House located at the base of Winter Park Resort was recently listed as one of Colorado’s Most Endangered Places.  Your support will allow GCHA to support these efforts of preserving our community’s contribution to ski history.

Cozens Ranch Museum brings to life pioneer times of the late 1800s at the first homestead of the Fraser Valley. Travel back to the days of stagecoach travel and pioneer ranching. See where countless visitors found shelter and food after the arduous journey over Berthoud Pass. The restored buildings at Cozens Ranch Museum are all that remain of a large ranch complex which once covered over seven hundred acres. The museum, listed on the National Register of Historic Places, is the only museum in the Winter Park-Fraser Valley region. It’s the “Biggest Little Museum.”

When the stage from Georgetown to Hot Sulphur Springs commenced, the Cozens Ranch was the first stage stop on the west side of Berthoud Pass. Tired, windblown and dirty travelers enjoyed a nice warm thirty-five cent lunch prepared by Mary York Cozens and her daughters.

After a successful career as sheriff of Central City, Colorado – recognized for his courage and honesty, William Zane Cozens moved with his family to the Fraser Valley in 1874. Between 1874 and 1881, structures were completed which provided a family residence, a small hotel, a stage stop, dining room and the first Fraser Valley Post Office. Billy Cozens was appointed postmaster of the Fraser Post Office in 1876 and held the post until he died in 1904. Their large house with six bedrooms served as the hotel. The Cozens family prospered with the day and cattle ranch, the post office, hotel and stage stop.

Your support will assist with the preservation of this Grand County and National treasure and the upkeep of the museum and it’s exhibits.

The construction of the Kremmling Depot began in 1904 and was completed in 1906. Construction of the Denver, Northwestern & Pacific Railway continued west from Hot Sulphur Springs toward Kremmling during this time. In 1905, the railroad purchased 100 acres of land in Kremmling to be used for yards and shops.

Soon work began on a depot near the Grand (Colorado) River on the town’s southern edge. The Depot has undergone several improvements and additions throughout its history. In 1954, the Railroad performed several updates. These included installing a new sanitation system and updating the wiring for new lighting fixtures. The ceiling was also lowered. Shortly after these updates, use of the Depot was discontinued by the Railroad. The Depot sat vacant for several decades. In 2008, the community of Kremmling rallied to save the Depot from its imminent demolition. It was moved five blocks to its current location at the Heritage Park Museum complex. 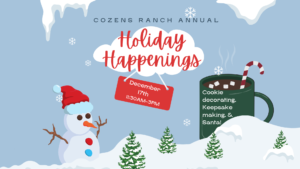 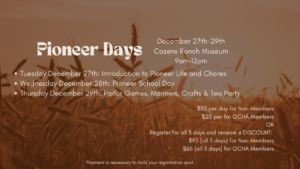 School age children (3rd to 6th grade) can come and live the Pioneer lifestyle! This multi-day program will have a different theme each day, so join us for all 3 days or pick and choose[...]
Dec
28
Wed
9:00 am Pioneering Kids Program @ Cozens Ranch Museum
Pioneering Kids Program @ Cozens Ranch Museum
Dec 28 @ 9:00 am – 12:00 pm

School age children (3rd to 6th grade) can come and live the Pioneer lifestyle! This multi-day program will have a different theme each day, so join us for all 3 days or pick and choose[...]
Dec
29
Thu
9:00 am Pioneering Kids Program @ Cozens Ranch Museum
Pioneering Kids Program @ Cozens Ranch Museum
Dec 29 @ 9:00 am – 12:00 pm

>> Join GCHA Today! Choose from a variety of membership levels.

>> Sign-up for the Email Newsletter & get the latest news about events, museum exhibits & more!